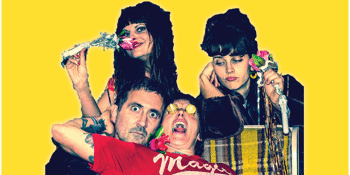 Tropical Fuck Storm return to Australia from a victorious, heart warming and soul saving crusade in the United Kingdom and along the Mediterranean to cool down with some restriction free shows back home.

Their sound is difficult to pin down yet at the same time it’s instantly identifiable. Elements of hip hop, noise rock and industrial can all be heard – all within a single song. Their third release Deep States goes wherever it wants, riffing on pop, R&B, Talking Heads-style new wave, Delta blues, Tom Waits, and some of the band’s hip-hop favourites such as Wu-Tang Clan and Missy Elliot. Barriers aren’t just broken, they seem to have completely fallen away.

With lyrics that are at times poignant, genuine and funny (sometimes all at once), the band has made a career out of crafting brain melting apocalyptic art punk songs attuned to political and social crisis. What makes Tropical Fuck Storm so great is the intersection between their dark but satiric storytelling and musical arrangements intent on perverting the accepted way to make music.

Over the past few years, we’ve all heard the noise in our own heads. Tropical Fuck Storm has made music of it.