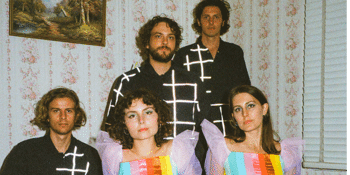 with special guests Sunfruits
The Croxton Bandroom (Thornbury, VIC)
Friday, 22 October 2021 8:00 PM
27 days away
18 Plus
Indie
Send this event to

RELOCATE: All tickets sold to The Corner on Sunday 29 August are valid for this show

Nice Biscuit will hit the road in August to celebrate the release of their latest single Passing Over. The band will support King Gizzard and The Lizard Wizard at their 5-night residency at Vivid and play the Oxford Arts Factory's 14th Birthday Party before landing in Melbourne for a headline show at The Corner.

Formed in 2016, the band has gained a reputation for their awesome live shows, which have captivated audiences in Australia and across the UK. After taking a short hiatus at the end of 2019, Nice Biscuit returned in December 2020 with their long awaited single Fem Chem, which featured on their latest EP, Create, Simulate. The EP received rave reviews and was playlisted on Double J, laying the groundwork for the big year ahead for these underground psych heroes.