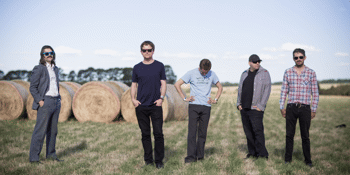 Everybody’s got a story for the last two years, they are mostly boring.  Our boring band one began on the 1st of January 2020 when we entered a Preston studio for a few days of tracking for something or other that might still end up being something or other.  We were already pretty advanced in our planning for the 20th anniversary of our naive and, as people seem to like saying of their most trivial designs these days, ‘iconic’ debut SUNSET STUDIES.  Nothing trivial about that very long player though, an important record for us and for a decent number of people around the globe, and we were determined to give it a classy birthday.  Then the meteor hit the nuclear reactor, they changed the BBQ Shapes formula again, and everything fell to pieces.

Two years on the idea persists, and we’re pleased to announce, free from all the nasty paperwork that would go into insurance planning or any of that ‘normal’ industry stuff, some dates for some possibly, let’s say probably, occurring SUNSET STUDIES LIVE shows.  Unlike most BIG AUSTRALIAN ANNOUNCEMENTS we’re going to follow through with action if we can.