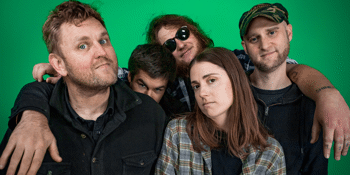 with BODYJAR and SOMETHING SOMETHING EXPLOSION
The Croxton Bandroom (Thornbury, VIC)
Saturday, 10 September 2022 7:00 PM
32 days away
18 Plus
Rock
Punk
Send this event to

The Smith Street Band & Bodyjar are joining forces for a massive night at The Croxton on Saturday 10 September.

The Smith Street Band recently released ‘I Don’t Wanna Do Nothing Forever’, the debut single from their soon to be announced sixth album. They will have released the albums second single before this show.

In February this year, Bodyjar released ‘New Rituals’, their first album in nearly ten years. It became their fifth album to reach the ARIA album chart, alongside classics ‘How It Works’ & ‘Plastic Skies’.

Somehow both bands haven’t played together since Big Day Out 2013, so don’t miss the chance to see two of Melbourne’s all time greats of punk rock on the one show.

They’ll also be joined by Something Something Explosion. Tickets are on sale now.